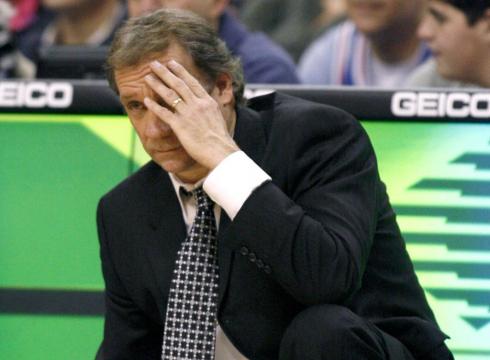 After a 2-15 start, the Washington Wizards fired coach Flip Saunders on Tuesday.

Assistant coach Randy Wittman will take over as coach. The Wizards, who have lost seven of their last eight games, host the Charlotte Bobcats on Wednesday.

Saunders was in the third year of a four-year, $18 million contract.

"We felt the team had become unresponsive, and we will look to Randy to provide a different voice and a change in philosophy moving forward," Wizards president Ernie Grunfeld said in a statement released by the team. "We have been transparent in how we would evaluate our team this season and we were disappointed in the lack of development of our players at this point in our rebuilding plan."

The Wizards' management had hoped to avoid firing Saunders, even as the club lost its first eight games. But the team's continued poor play, combined with the regression of last year's No. 1 draft pick John Wall, left the team with no choice.

Wall is averaging 7.2 assists per game this season, nearly a full assist less than the 8.3 per game he averaged in his rookie year. His shooting percentage has declined to .379 from the field this season from .409 in 2010-11.

Wall hasn't gotten much help from the Wizards, who have been prone to inconsistent play. On Monday in a 20-point loss to the Philadelphia 76ers, they walked down the court for offensive possessions, failed to hustle after loose balls and missed eight of nine shots in the paint in the first quarter.

After one string of sloppy plays, Saunders took a knee in front of the scorer's table, bowed his head and rubbed his temples.

While the Wizards have plenty of young, talented players, they have shown a lack of discipline and Saunders could not seem to get through to them.

Earlier in the season, the players held a team meeting in which the younger players asked the veterans to tell Saunders they wanted him to hold them more accountable, according to sources. The veterans discussed it with Saunders, but after more than two seasons of his softer approach, it was perhaps too late for him to gain control of his roster.

The Wizards tried Saunders' patience right away, blowing a 21-point lead to the New Jersey Nets in their season opener. Afterwards, Andray Blatche voiced displeasure over the offensive play-calling and later, on Twitter, told those criticizing him to "shut up."

In a home loss to the Houston Rockets on Jan. 16, a visibly annoyed Saunders sat JaVale McGee for the final nine minutes after McGee alley-ooped to himself off the backboard on a breakaway dunk. McGee responded by defending the play to reporters, saying "Apparently if you get a fast break and throw it off the backboard in the third quarter and you're 1-11, you're not supposed to do stuff like that."

Washington was Saunders' third coaching stop. In 16 seasons with Minnesota, Detroit and Washington, the 56-year-old Saunders compiled a 638-526 record, including 51-130 with the Wizards. He reached the playoffs 11 times, including three straight seasons with the Pistons, and cracked the 50-win plateau seven times.

Wittman, 52, has more than four years of previous head coaching experience. In two years in Cleveland and three in Minnesota, he posted a record of 100-207. In his last stint, with Minnesota, he was fired after the Timberwolves started the 2008-09 season 4-15. - ESPN